To register evoked potentials, the patient must perform a specific task in front of a monitor. This task consists of pressing a key before the appearance of certain elements and not pressing it before others. This task is performed for 20 minutes in which the brain activity is recorded in response to the need to respond or inhibit the response in the task. 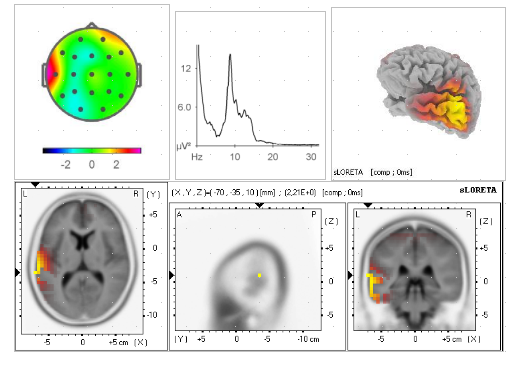 Mapping of the brain activity record.

Depression
Frontal alpha asymmetry and some presence of excess beta in the qEEG analysis
Deleted the executive control component of the p300 in NOGO condition of the evoked potential analysis.

Anxiety
Increase of beta in the central midline
Increase of positive and negative components in the analysis of evoked potentials.

Insomnia
Decay of alpha, appearance of theta and paroxysms in the analysis of qEEG